Cemeteries and obituaries are often considered morbid conversation, but to family members and historians they are priceless. Obituaries are mini-life summaries and cemeteries are history memorials. A cemetery often can reveal answers for family members and help historians piece together the history of the local pioneers or town and on the other hand, can suggest more questions.

Fortunately, the greater Elk Grove area has several pioneering cemeteries with much known history. Two cemeteries in particular, the Elk Grove Cemetery and the Sloughhouse Cemetery have detailed histories of most of the residents.

The Elk Grove-Cosumnes Cemetery District (egccd.com/our-cemeteries) is one of five cemetery districts in Sacramento County. They have been serving the Elk Grove Community since 1951 and presently oversee the care, up keep, and burial services of six cemeteries in the area, the Elk Grove, Franklin, San Joaquin, Pleasant Grove, Hilltop, and Elder Creek cemeteries.

There are other cemeteries in the area that don’t fall under their responsibilities because they are in different districts, privately owned, on private property, are family cemeteries, or other reasons. A few are Hicksville, Sloughhouse, Michigan Bar, Union, Point Pleasant, Bellvue, Kilgore cemeteries, etc.

Location: On the southeast corner of Elk Grove Boulevard & Highway 99

This cemetery is known as the Masonic Cemetery established in 1874 and was the location of the town of Elk Grove before the railroad came through in 1868.

Notable Residents: Joseph Kerr and other members of the Kerr family are buried along with other early day pioneers. The grave at least one civil war veteran is in the cemetery.

The most famous grave here is that of Elitha Cumi Donner-Wilder, a survivor of the well-known Donner Party. Elitha, thirteen years old at the time, was stranded with her family members in the high Sierra Nevada during the winter of 1846-47. She was rescued by Dan and John Rhoads and others and lived the rest of her life in the Elk Grove area. 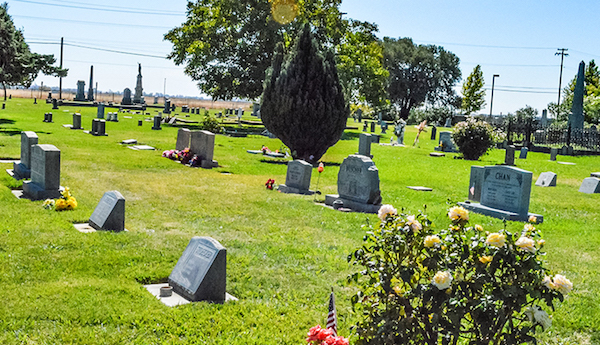 Location: On the northwest corner of Franklin Boulevard and Franklin-Hood Roads

One interesting fact you will notice is that many stones are carved with Chinese characters. It seems that the cemeteries of the Sacramento Delta towns did not allow the burial of Chinese immigrants, so residents who died there were buried inn the Franklin Cemetery.

Notable Residents: There are several early well known farming families interned in the cemetery, but the most famous resident is Alexander Hamilton Willard, which was the last surviving member of the Lewis and Clark Expedition.

Location: The northwest corner of Sheldon Road and Highway 99

The cemetery gets its name from the San Joaquin Township that covered all of what we know as Elk Grove and Florin. It was a church cemetery for it dates back to the 1860’s, and was the location of the Ebenezer Baptist Church. They say it was sold to the cemetery district for $10 by the State of California in 1973.This is where many of Elk Grove’s early day pioneers were laid to rest.

This cemetery is a school-cemetery combination that wasn’t uncommon in the days of the one-room country school. This was a little country school in a pleasant grove of trees.

Notable Residents: Many pioneers from the Sheldon and surrounding area are buried here. 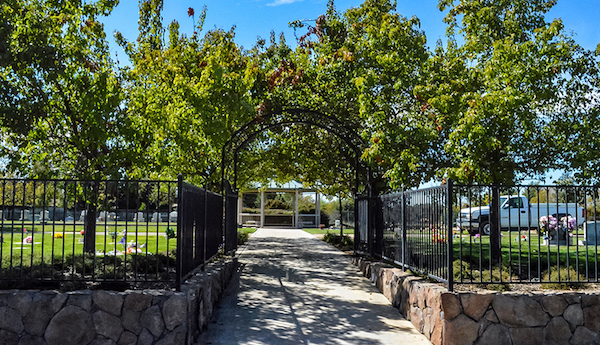 Location: On the top of the hill on the west side of Waterman Road, between Elk Grove Boulevard and Bond Road.

A new I.O.O.F. lodge was formed in 1878 and one of the first major projects of the new lodge was to purchase a cemetery site, which they did. The brethren purchased two-and-a-third acres from Mrs. Kent at $30 an acre on Waterman Road, north of Main Street (now Elk Grove Boulevard). After Harry Wackman passed away on December 14, 1878, he became the first person buried at the cemetery.” The Cemetery became part of the EG-Cosumnes Cemetery District in 1951. Since the cemetery wasn’t being used, it fell into disrepair and over the years, vandals destroyed and removed headstones. In 1999, the cemetery district was able to financially able to begin restoration of the cemetery. Before it could be used again, they needed to identify where graves were located. They hired a company that used Ground Penetration Radar (GPR) to locate gravesites. Once that was done the cemetery was restored with many gravestones repaired and remounted. It has been landscaped and once again opened for burial. Presently, Galt resident and Sonoma State graduate Amber Tedrow is writing her masters thesis on the cemetery and used updated GPR on March 25, 2020 to determine availability in a site not scanned before in the hopes of opening a new section to be used for burials. (In 2000 GPR was used, but it was new and didn’t yield any readable results.) 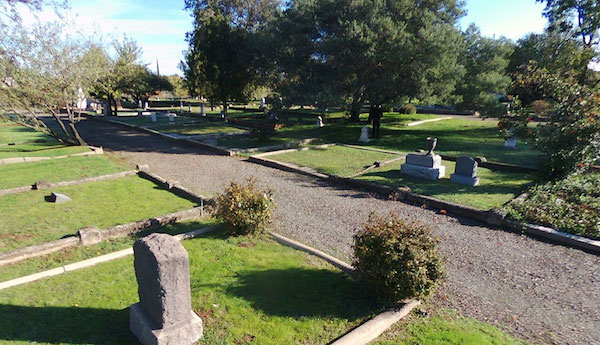 Location: On the north side of Arno Road and a quarter of a mile from Highway 99.

The cemetery was the center of controversy several years ago regarding claims made by the Miwok Native American families. It appears that Pio Valsein gave a part of the cemetery to the Miwok people many years ago as a burial ground. Many early day Wilton pioneers are also buried in the cemetery. The Hicksville Cemetery is the only remnant left of the long gone town of Hicksville that had its origins in the early 1840’s.

This cemetery is in the Galt-Arno Cemetery District and this is what the district states on their website:

The Hicksville Cemetery, located on Arno Rd about 1/8th mile East of Hwy 99, was part of a 1846 land grant to Billy Hicks from Captain John Sutter. Billy Hicks’ first wife, weakened from childbirth, died of cholera and was followed two weeks later by his new baby daughter. They are believed to be the first white settlers to be buried in the cemetery though it is believed that Native American Indians had been burying nearby for years previous. Unfortunately, their markers have long been lost due to vandals, fire or flood that used to commonly occur.

As Billy Hicks deeded the parcels of his land grant to family members and other settlers, the private graveyard became a cemetery for the community. The earliest record of the Galt-Arno Cemetery shows that a baby, Louie Davis, was buried here in 1857. In 1897, Mr. J.H. McKune deeded the Hicksville Cemetery to the Methodist-Episcopal Church. Although the church is no longer standing, it is believed to have sat in front of or near the Davis family plot. In the winter there is a distinct outline seen where a building could have stood. 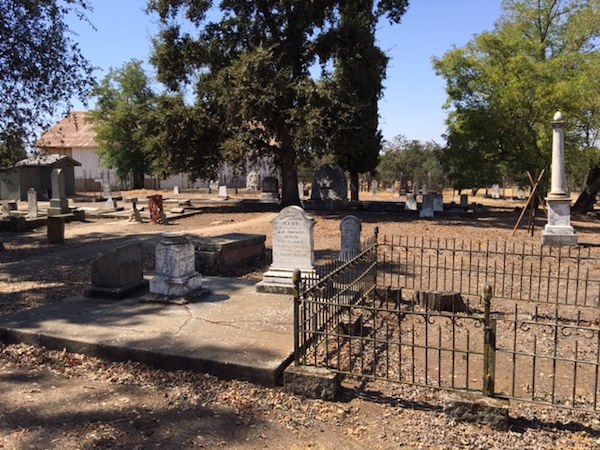 This is the oldest pioneer cemetery in northern California. The area was deeded from the Mexican government to Jared Dixon Sheldon as part of the Omochumnes Land Grant, Rancho Omochumnes in 1842. It became a family cemetery for Jared and Catherine Sheldon who are both buried there. Before that this hilltop cemetery had been a sacred cremation spot for the native Miwok who lived in the area. William Daylor was the first white man to be buried on the hill in 1951 following his death from cholera. 1971 Percy Westberg, a direct descendent of Catherine Rhoads Sheldon Mahone, began negotiations with the Daughters of the Utah Pioneers regarding the future of the cemetery. The result was the transfer of the title of this little piece of land to the organization and their agreement to its maintenance and permanent care.

The graves have been well studied and much information and documentation has been found on every resident of the cemetery. The cemetery is a hot bed of history, especially relating to the beginnings of Elk Grove.

FYI – The original spelling of Slough House was two words. The combining into one Sloughhouse did not occur until recent history.

A good source of information about the cemetery is copy of the D.U.P. publication Historic Cosumnes and Slough House Pioneer Cemetery by Norma Ricketts.

Other Miscellaneous Cemeteries in the Area

Location: No longer active and on private land in Rancho Murieta

Location: On Grantline Road, east of the town of Sheldon. Family cemetery, no longer active, and on private land. Owners have asked to respect their family. Do not enter.

From Bernice Gallup’s writings in 1950…

…………where 30-35 sturdy pioneers and their families who settled in the Sheldon district in the 1850’s are buried.

Established on land donated by James Elder, who owned 800 acres of fine land running along Grantline to the Cosumnes River. The cemetery has become a forsaken place with high grass, weeds, poison oak, squirrel and gopher holes. The original brickwork surrounding it has is broken and scattered and the plot riddled by rodent holes. There are a few scattered broken headstones in disarray and un-respectful of these early pioneers.

Location: On Point Pleasant Road off of Franklin Boulevard

Owned and managed by the Methodist Church and next to their property.

Location: On Elder Creek Road and is part of the Arlington Cemetery.

This cemetery has been used since the mid 1850’s when it was used by the Bell and Ellis families. Bellvue incorporation papers are dated 1875, but fell into disuse until 1994 when its restoration became a priority for the State Cemetery Board. It is now owned by the Blago Slavic Missionary Church.

Location: West of and off of White Rock Road, between Zinfabdel and Sunrise, south of Folsom Boulevard.

It is owned and operated by the City of Rancho Cordova. It’s just a tiny patch of ground, but family members have painstakingly preserved it through the years. The family of Mathew Kilgore came from Iowa and settled in Walsh Station and Mills area of Sacramento County. Family members were active with Enterprise School near Walsh Station.

AKA Fay/Perry and Hughes Ranch

No longer active and located on private land in Rancho Murieta

Location: On Scott Road , between Jackson Highway and US 50

Privately owned, but open to the public.

Privately owned and open to the opublic.

There are around ten other cemeteries in or around the greater Elk Grove area that we know of but are either “defunct” or their locations need to remain confidential: i.e. Millgate Family Cemetery, Daylor Ranch Cemetery Clay Station (AKA Barton) Cemetery, among others.

Much of this information came from on-line cemetery websites, from Elk Grove-Cosumnes Cemetery Board member Dave Lema, and a large portion from Elizabeth Pinkerton’s History Happened Here Book-1.

(NOTE: Much of this information was gathered from our local historian Elizabeth Pinkerton’s HHH history books, the cemetery district website, the Elk Grove Historical Society research library files, and information shared by several members of the community. It is by no means complete and various memories maybe different than actual facts, but it is the best we can do and believe it to be true. We are always willing to except more information. Please contact us if you have anything to share. Thank you)

We would like to thank Elk Grove’s unofficial official historian, Elizabeth Pinkerton, for her graciousness to allow us to use some of the above information from her book “History Happened Here (HHH) book-2” Elizabeth Pinkerton gathered a lot of the  information over many years and compiled everything into three books. Thank you.

We the People, a Story of Internment in America

All book proceeds go for student scholarships. She thanks the many purchasers who have made possible the 71 scholarships she has presented, each for $1,000  – Make your check for books payable to Laguna Publishers and send to her at 9227 Lamprey Drive, Elk Grove, CA 95624.  Books are $20 apiece and California sales tax is included. Add $3 for shipping of one or two books; $5 for 3-6 books. Call her at (916) 685-0606 or email me at elizabethpink@gmail.com.  If you purchase any three HHH books you can receive them at a special price of $50.