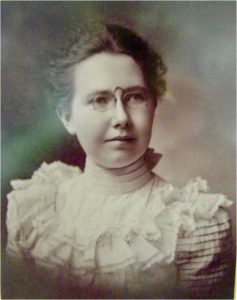 There’s another chapter of the Elk Grove High School story, and this one was written by a woman. She was Harriet G. Eddy, Elk Grove’s principal from 1906 to 1909, and she was a woman with a vision. Just as there ought to be books about Dr. James McKee and Joseph Kerr, there should also be one about Harriet Eddy. For reasons that you will soon know, the book about her should be in every library in Elk Grove. But there isn’t, so through the story that follows, at least the people of Elk Grove will know about Miss Eddy and her role in a most significant event in the story of our high school. Harriet G. Eddy, you see, is a key person in the story of libraries, not only in Elk Grove, but in California and the world as well.

Let’s go back to 1906 when the trustees of Elk Grove Union High School hired Miss Eddy, somewhat unusual, but then this woman was not the typical female of the day either.Miss Eddy was brilliant and a person who was not afraid, as they said, to reach for the sky. She made history by establishing the first county branch of a library in the state of California. It happened on October 19, 1908. Here is the story.

Elk Grove Union High School had weathered its opening years by the time Miss Eddy came there as principal, but the school had a serious problem. It had not been able to meet accreditation standards set by the Western Association of Schools and Colleges (WASC). Students who graduated from Elk Grove had to attend a year in an accredited school before they could attend a college or university. Miss Eddy made up her mind to get Elk Grove High School accredited so that graduates would be able to go directly to the university if they chose to do so.

One of the conditions of accreditation that the school had not been able to meet was having a library. Up until that time, the only library that existed was the services of the traveling library instituted by the State Library. Ames Gillis, the state librarian, was trying to expand library services beyond the cities into rural areas. He was very pleased with legislation that had created the traveling library in 1903, but it wasn’t enough. He was anxious to do more for the rural residents of the state. Gillis knew about the county library system in the state of Ohio, and he knew it would work in California. All it would take would be establishing a county tax rate for library services. In this way all residents could be provided with books.

At about this same time, Sacramento City Library’s Lauren Ripley was trying to find ways to serve the growing rural population of the county. It was this combination of people – James Gillis, Lauren Ripley and the indomitable Harriet Eddy, that sparked the formation of the Elk Grove Library. And it was the Elk Grove Library that ignited the library flame all over rural California and from there, to many other parts of the world. Impressive, isn’t it?

Miss Eddy wrote to Mr. Gillis in October of 1908. She asked him to expand the high school’s book supply from the traveling library. Gillis told her about the contract being established between the Sacramento County Board of Supervisors and the City Library and suggested that she apply for a branch in Elk Grove. For $3,500 a year, a deposit station could have as many book units as they wanted, and there were 50 books in each unit. A custodian of the books would receive a salary of $2.50 per unit each month. That’s how the Elk Grove Branch Library was established. It was the first in the state of California. The official date was October 19, 1908. 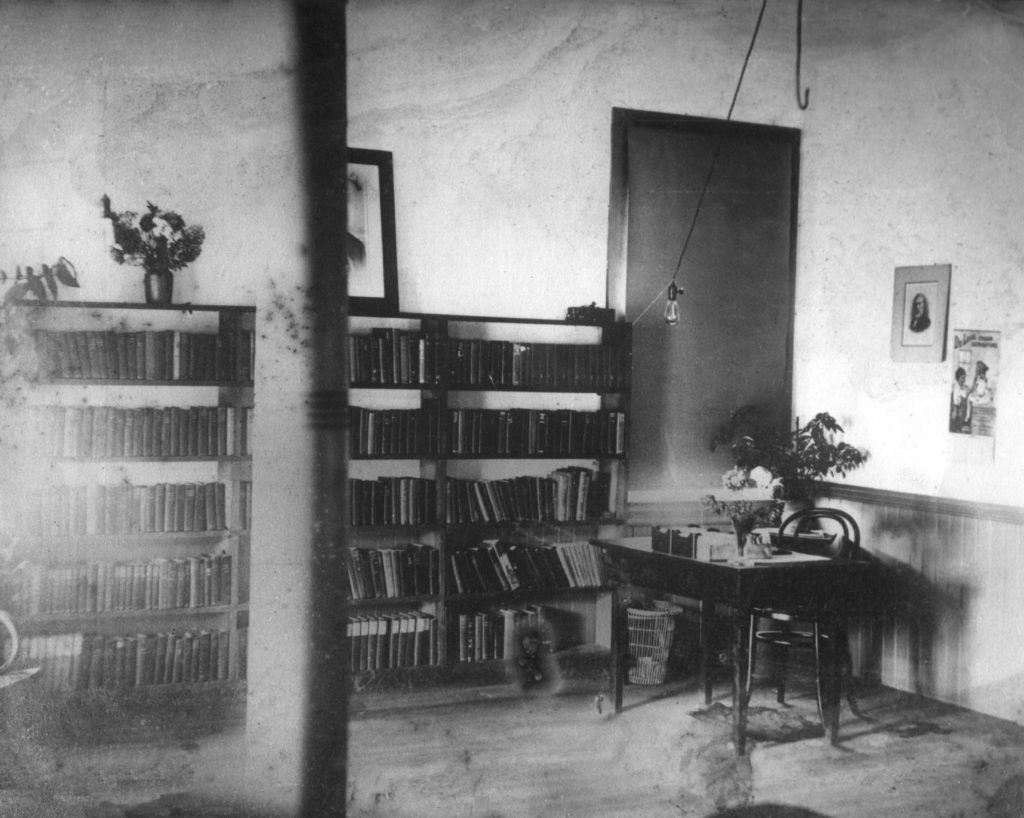 Miss Eddy had 1,000 books and even some magazines. At first they were stacked on a few shelves in the hallway. But by January, it was obvious that the library was going to be a success, so the W.C.T.U.offered a free room right next door. There’s a sign at the entrance of Elk Grove that proclaims this status, and there’s a marker on the old Grange Building as well. 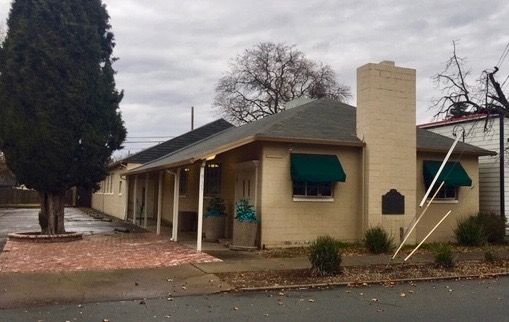 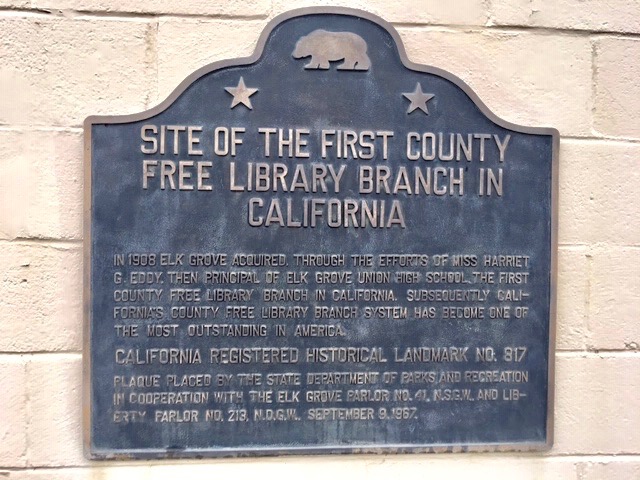 That’s where the W.C.T.U. Building was, and that’s where Miss Eddy set up that very first library. This was the same building that had been used for classes in 1893 until the new high school building was completed.

High school students painted the room and even added wallpaper for a cozy touch. Mothers made the curtains, and Miss Eddy bought chairs and tables from her tiny librarian’s salary of $5.00 per month. During the day, students kept the library open, but after school and in the evenings, it was Miss Eddy who acted as the librarian and who kept the books going out to the readers of the community. According to the busy principal/librarian, the library became “a real social center for the entire district.”

Miss Eddy left Elk Grove in 1909 and went to work for Jim Gillis and the State Library. For the next ten years, she organized branch libraries all over California. In the 1920s, Harriet Eddy’s amazing talent for library organization took her to Russia and Yugoslavia where she set up library systems for those two counties. Some time later, Harriet Eddy went to the Soviet Union and organized their library system on the California model. She did the same in other European countries.[xiv]There were local folks who were critical of Miss Eddy’s venture, for it was not politically correct to be associated with socialist leanings in those days. But those who knew Miss Eddy valued her dedication and her visionary thinking, and it can certainly be said that her gift to Elk Grove was one that had lasting effects.

From this humble beginning in a high school hallway, Elk Grove’s library set the pace for the rest of California. Our Elk Grove library continues today the fine tradition begun so many years ago, and our fine high schools do the same.

Again, our humble thanks to Elizabeth Pinkerton for the use of her writings and information.

Time Line History of the Library:

1950 – Moved to 9590 Second Avenue in the southeast corner of the former courthouse building.

1996 – Expansion of the library branch to include part of next door to nearly double in size.