The center of Elk Grove moved three times and some can even say that Elk Grove has now expanded so widely that there is no center, even though we still consider Old Town the real Elk Grove. 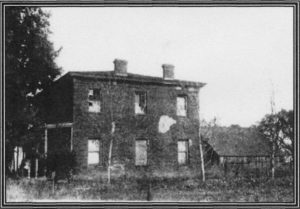 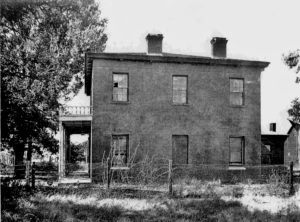 The first Elk Grove was one building, a brick stage stop and hotel that was built by James & Sarah Hall in 1850. It was located in almost the exact spot where the replica has been rebuilt located at the beginning of the west entrance to the Elk Grove Park. It was actually a few yards west where the north lane of highway 99 built. This was exactly one mile south of the present Elk Grove Boulevard and Highway 99 intersection. 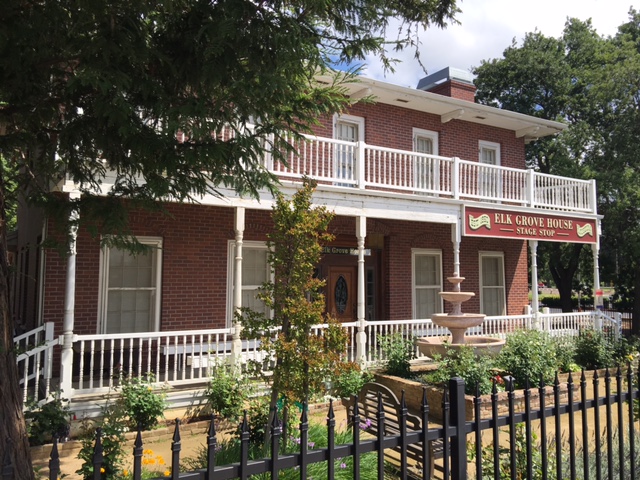 “Built of solid brick in 1850, with three-bricks thick walls for the lower story, and two-brick think walls of the second story, the building was in good condition and occupied until dismantling starting. James Hall and his family came to California in the days of horse and cattle thieves and opened a hotel. (See the “James Hall Story – The beginning of Elk Grove” in HISTORY TOPICS).”

“The hotel had 13 rooms and three bathrooms and had been used as a stage stop for a short time in the early 1850’s  before the Buckner Hotel was built a mile north.”

“Old timers of Elk Grove remember gunplay stories about the vicinity told to them by their parents and the story of the Buckner Hotel burning in 1857, leaving the old hotel to stand until a few weeks ago.”

“According to Mrs. Guy Foulks, who was born in the building purchased in the 1850s by her family, the Francis Grahams, the ranch included all of Elk Grove Park and land to the Cosumnes River.”

“Located on the J.M. Brown dairy ranch, the original landmark is now completely torn down. Brown said markings on the wall indicate that dances must have been held in the upper story as far back as 1882. He and son, Marion, in partnership on the ranch, plan to build two modern homes for their families from the used bricks.”

The first Elk Grove Hotel was a two-story brick building. A front door with side panels of glass led into the hallway with a staircase having a cherry rail leading to the upper floor. Rooms opened on either side, and at the end of the hallway. Both side rooms had a fireplace. The room at the end of the hallway was used as a dining room. The kitchen was a lean-to built on the east wall.  The upstairs had a hall bisecting the Hotel north and south. Bedrooms faced the front side and the ballroom on the other4 side. The Hotel had a total of thirteen rooms. Bathroom and other facilities. of course, were in the back.

A large wooden porch was across the front of the Hotel and wood columns supported the balcony. An Ornate molded blister surrounded the balcony which over looked Stockton Road (later Highway 99). The upper story had French doors leading onto the balcony. The doors and windows were inset and all windows had shutters. The door casings were narrow at the top than the bottom with a decided bevel on the outer side. The Hotel had a weekly mail service, and stables were located across the road. People who loved on ranches in the surrounding area took the stage there and walked across the fields to their homes.

The Hotel served as a center in the early days with merrymakers coming from Sacramento in a tallyho, dancing all night, having breakfast, and then making a three-hour buggy ride back to the city.

James Hall left for Vallejo and the Hotel property was purchased in 1859 by the Francis Graham family, and at that time included all of the Elk Grove Park and land to the Cosumnes River. These holdings were called Graham’s Grove and Graham’s Lake. The grove became the first park district in California. Mr. Graham’s granddaughter (Mrs. Guy Foulks) was born at the Hotel.

In 1901 0r 1902 the Hotel building and surrounding acreage was purchased by Zaccheus Markofer. Fruit trees and vines were planted.

In 1916 Mr. Markofer’s younger son, Harry S., left the University of Berkley to come home to manage the ranch. When he married Florence Polhemus in April 1917, he removed the plumbing. In 1917, Mr. Markofer was called to serve in World War I and when he returned in 1919 they took up residency in the old brick house. Their first daughter, Edna Mae (Mrs. Tufts) was born there in 1920.

The Hotel and surrounding land was later purchased by J.M. Brown who had a dairy operation and orchards. In the spring of 1957, Mr. Brown and son Marion, in partnership on the ranch, had to start the removal of bricks and began tearing down the old landmark.

James Watson Hall is unanimously credited with the naming of Elk Grove.  According to an early Sacramento county history, James Hall built his hotel in 1850. “ He painted on its sign an elks head and thereby established the Elk Grove Hotel.”   Thompson and West’s 1880 History of Sacramento County states he “…gave it its name, on account of having lived in Missouri in a town of the same name.”  The 1890 Sacramento County History  by the Lewis Publishing Company, Illinois, indicates “…he gave it the designation on account of having found elk horns in the grove nearby.”  An 1851 Sacramento County tax assessment lists James Hall as residing in “Elk Grove,”  which is the earliest documented evidence of the use of the name “Elk Grove.”  By 1855, James Hall had sold “the tavern stand known as Elk Grove House” and moved to Sacramento.

Was there an ‘Elk Grove” in any of these places? Indeed, yes.  In fact, there is an Elk Grove, Illinois, located near Chicago on the eastern side of Illinois.  Missouri also claimed an “Elk Grove” in Crawford County, not far from St. Joe, which was the jumping off place for the Oregon Trail.  And Elk Grove, Wisconsin, is located in Lafayette County, in the southwestern corner of the state, no more than twenty-five miles from Galena, Illinois.  The history books mention Galena, Illinois, as a prior home for the Hall family.  The Sacramento directories list Illinois as a prior residence.  An old 1850 gold rush diary verifies this information.  And it was very likely gold was the impetus which moved the James Hall family from the mid-West onto the Oregon Trail where they joined hundreds of thousands of gold seekers heading towards  California and the gold fields.

More clues to early Elk Grove and the Hall family can be found in Sacramento records such as marriage licenses, tax assessment records, and land deeds.  James W. Hall is first found in an 1851 assessment record.  He resided in Elk Grove “…fifteen miles below the city” and owned $1,000 in personal property.  On May 19, 1851, James joined the Tehama Masonic Lodge #II in Sacramento. James and Sarah’s daughter, Anne Adele, was married April 22, 1852 at the Congregational Church “…in the city.” Records show Anne A. Hall of Elk Grove, Stockton Road, married Ferdinand Woodward of Washington, Yolo County.  Tax assessment records for 1852 list J. W. Hall of Elk Grove  with $600 improvements to his property and $1400 in personal property.  By 1853, James seemed well on his way to success. J. W. Hall of Elk Grove, Stockton Road was assessed with $2000 in improvements and $1,000 personal property. In terms of 2006 dollars, this would be the equivalent of about $70, $150. 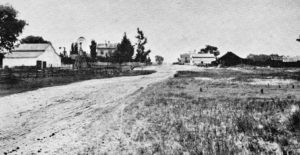 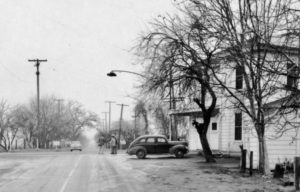 Elk Grove officially had its beginning in 1850, when stage lines flourished in the Sacramento and Stockton areas and was connected by the Upper Stockton Road, but as time progressed small businesses and residences started to develop and the small town moved north to a small intersection exactly one mile from the Stage stop to the second location on what is now Elk Grove Boulevard and Highway 99. It expanded there until locals realized the importance of the railroad. 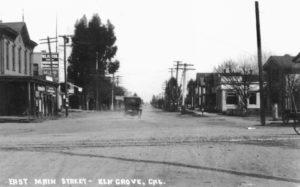 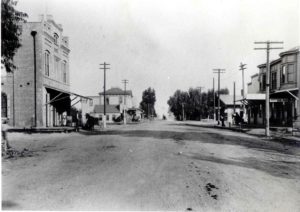 In 1868, the Central Pacific Railroad finished its line from Sacramento to Stockton and on to San Francisco. Unfortunately, whether by design or by neglect, the shiny new tracks missed the settlement of Elk Grove, that was north of its original location, at the intersection of Elk Grove Boulevard and Highway 99. The railroad didn’t miss Elk Grove by that much, but a mile is a mile, and there was no way that having tracks a mile away was going to make a town the picture of prosperity. (Note: I think the stage route that was called the Upper Stockton Road was missed because the tracks would have gone down a main road connecting Scaremnto and Stockton, so they moved east a mile) The little town struggle to survive and serve the growing agriculture community, but some folks had visions of the prosperity that could occur if the town was closer to the railroad. In 1876, the town of Elk Grove began to move closer to the new railroad tracks. The railroad truly brought Elk Grove into the 20th century — just as cityhood (2000) brought Elk Grove into the 21st century. 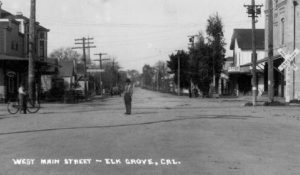 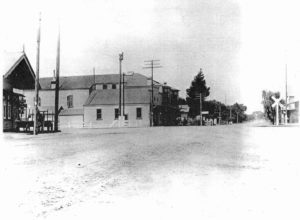 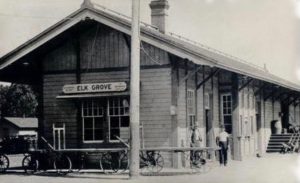 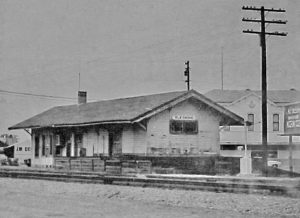