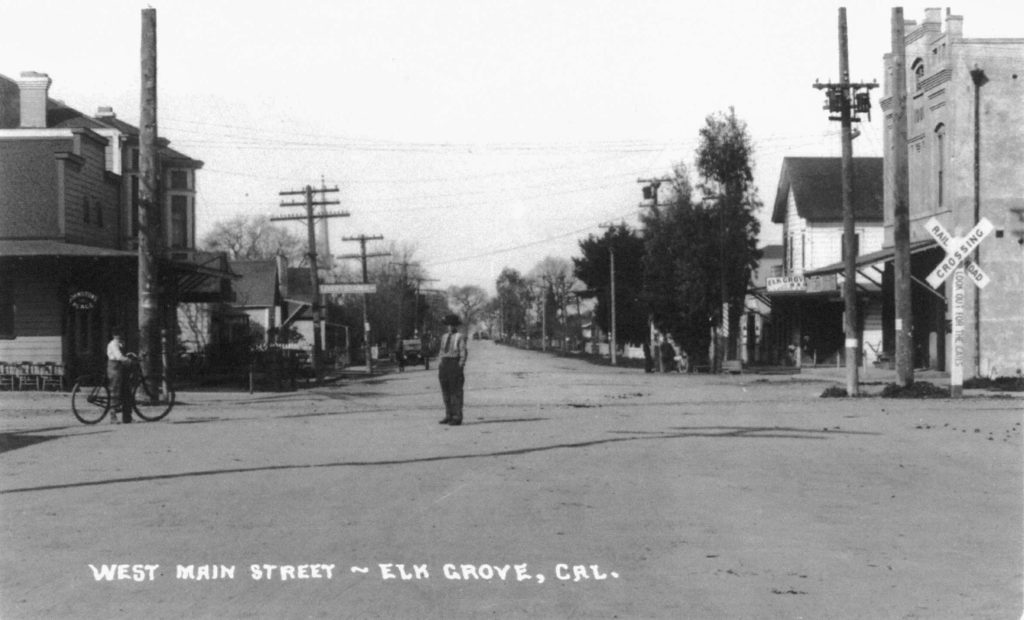 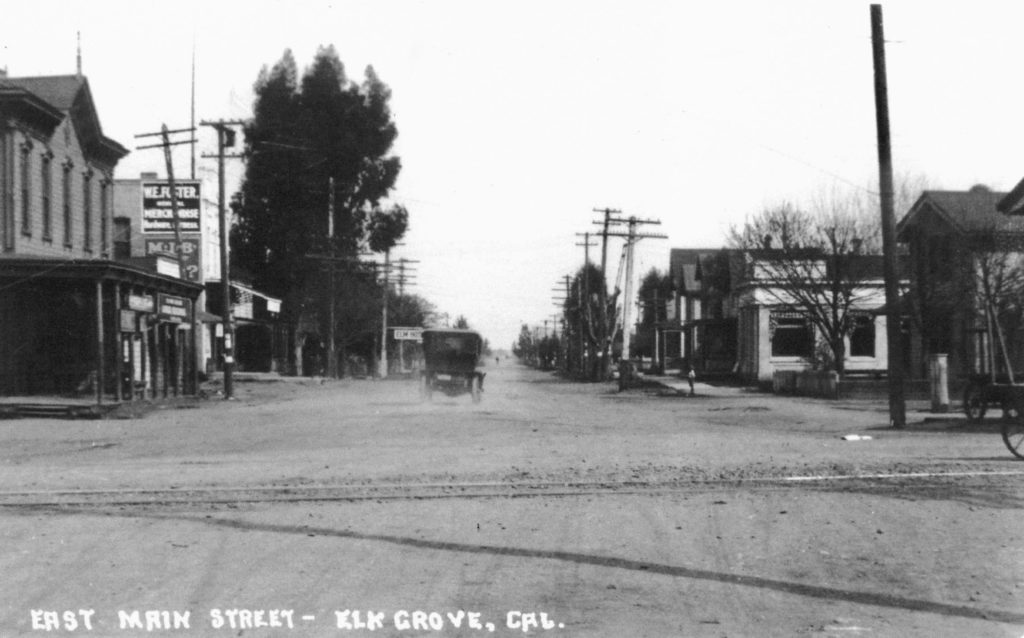 The beginnings of the town of Elk Grove began in 1850 and started at present day Elk Grove Boulevard and Highway 99. When the railroad came through in 1868 the town basically moved one mile east to the tracks for obvious business reasons. The buildings at the original spot were sparse and are gone, but in “Old Town” there are many historical buildings still in use today and each has have had an interesting and wonderful history.

Local historian Elizabeth Pinkerton assembled a walking tour map that you can print out to use to walk both sides of the streets to view the historic buildings. The map divides the history of each building by who resided there in 1880, 1900’s-1940’s, 1965-1990’s, and then to the present, February 2019.

To walk the entire route takes about 45 minutes. Here are what you will see 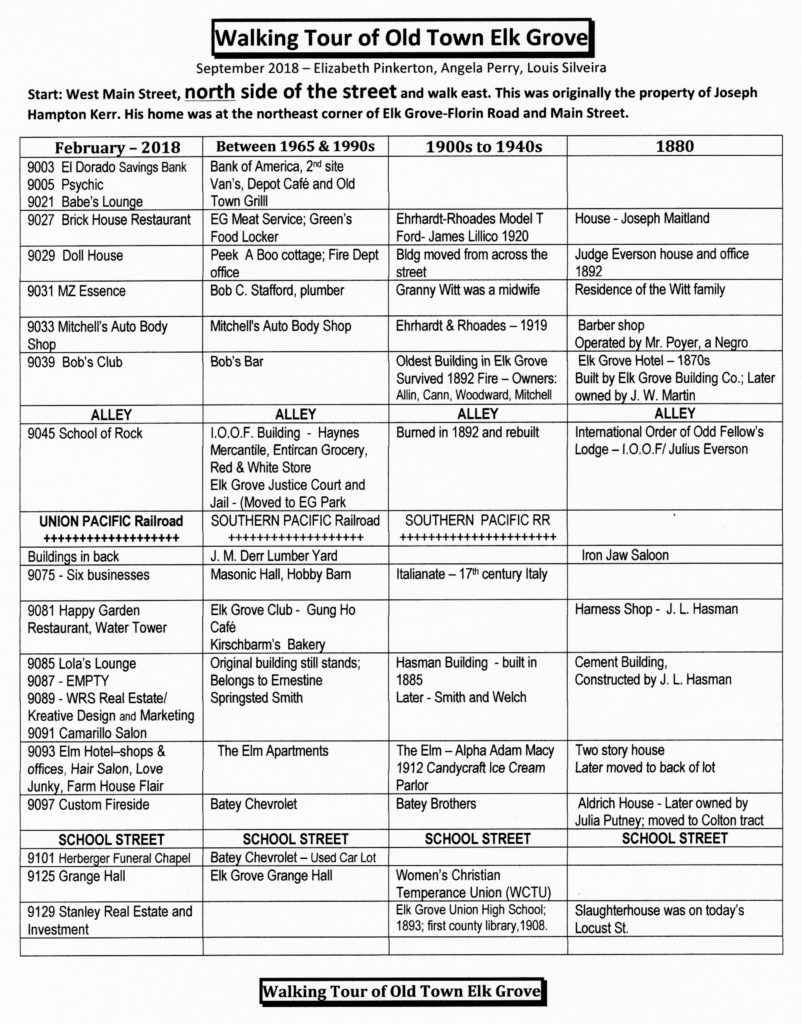 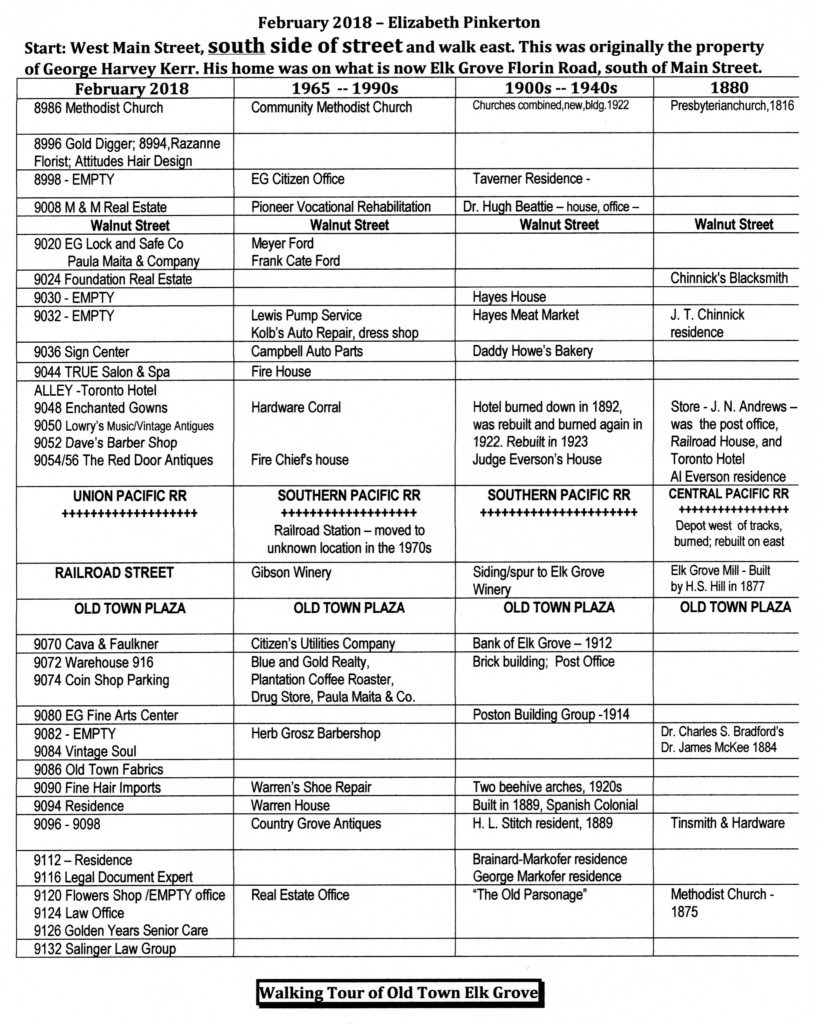 SOME OF THE HIGHLIGHTS OF THE TOUR:

Special thanks to Mrs. Elizabeth Pinkerton, Author of History Happened Here, Books 1 and2 and Mr. Lance Armstrong, Author of Echoes of Yesterday, Elk Grove. Photos from the Elk Grove Historical Society archives and information from the books of both author’s.

The original building, the Railroad House Hotel opened in 1876 and was a direct result of the Railroad’s expansion.  In the late 1880s the name was changed to the Toronto hotel.  The hotel, which also housed a general merchandise store and post office on its ground floor was devastated in the 1892 fire, rebuilt and burned again 40 years later in 1922.  Since that time, many businesses have come and gone but Dave’s Barber Shop continues as the business it opened as in 1922.  Under only 3 owners in all that time, it retains the original doors and windows and until very recently, still had the claw foot tub which many railroad workers and travelers paid to bathe in back in those early days.

(Note: This a 4 min YouTube video of the 1892 Elk Grove fire that almost destroyed the town. It was assembled by Russ Oase (EGHS ’66) a member of the Elk Grove N.S.G.W parlor #41 in 2019. Just hoover your cell phone camera over the symbol, when the yellow box appears press the camera and it should take you to the video. Enjoy?) 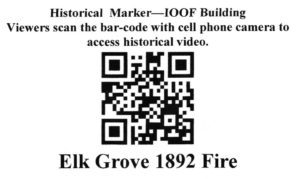 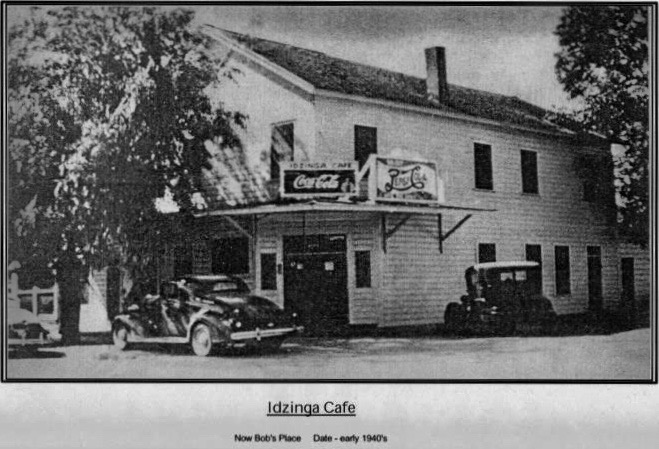 This well-known building is the oldest structure in Old Town Elk Grove that still exists in its original location. According to the National Register of Historic Places, building was built in 1876.  The building originally featured the Elk Grove Hotel which had continuous operation of more than 50 years.  It was one of only 2 buildings to survive the 1892 fire and also survived the second fire in 1922, shortly after which, with rooms on the second floor still being rented, the first floor may have contained a speakeasy during prohibition.  In 1930 it became Idzinga’s Café and in 1950 it was sold to Bob Parker who renamed it Bob’s Club. 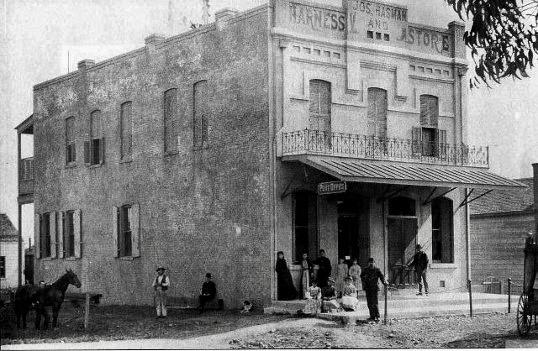 The land was purchased in 1885 by Charles Hasman who constructed the building using brick made at a ranch off of Grant Line Road.  Mr. Hasman operated a harness shop until 1901 when he converted his shop into a general merchandise store.  That store changed hands several times until the 1940s when the rooms on the second floor were rented as residences and an insurance and notary business and later a saddle maker occupied the lower floor until 1975. Since then, the building has been home to many restaraunts and the upper floor is used for offices and storage. 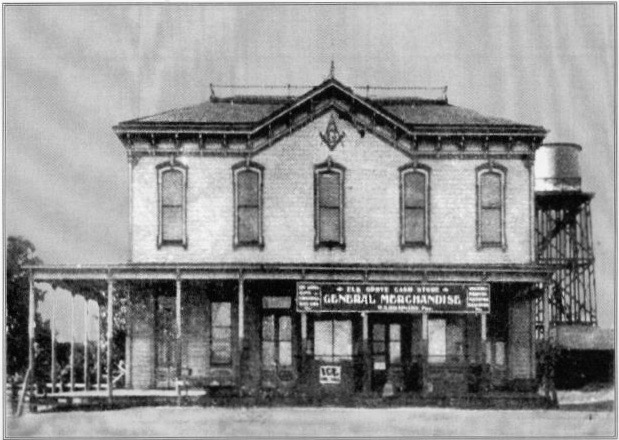 The cornerstone was placed at this site on August 18, 1880 and a 60 foot long by 35 foot wide building was constructed.  Construction of the present day building was completed in 1893 after the original building was destroyed by fire.  In 1928 the building underwent a major renovation when, to increase the size of the temple, the building’s second floor was literally sawed apart and the east end of the building was moved more than 10 feet to expand the main hall, banquet rooms and kitchen and a 6thwindow was added.  In 1993 however, another fire ravaged the building and was reconstructed with its original 5 window front façade.  The first floor of the building hosted many general merchandise and grocery stores until the 1960s.  Since then it has been home to a variety of businesses including hobby, auto parts, salons, insurance companies and Architects. 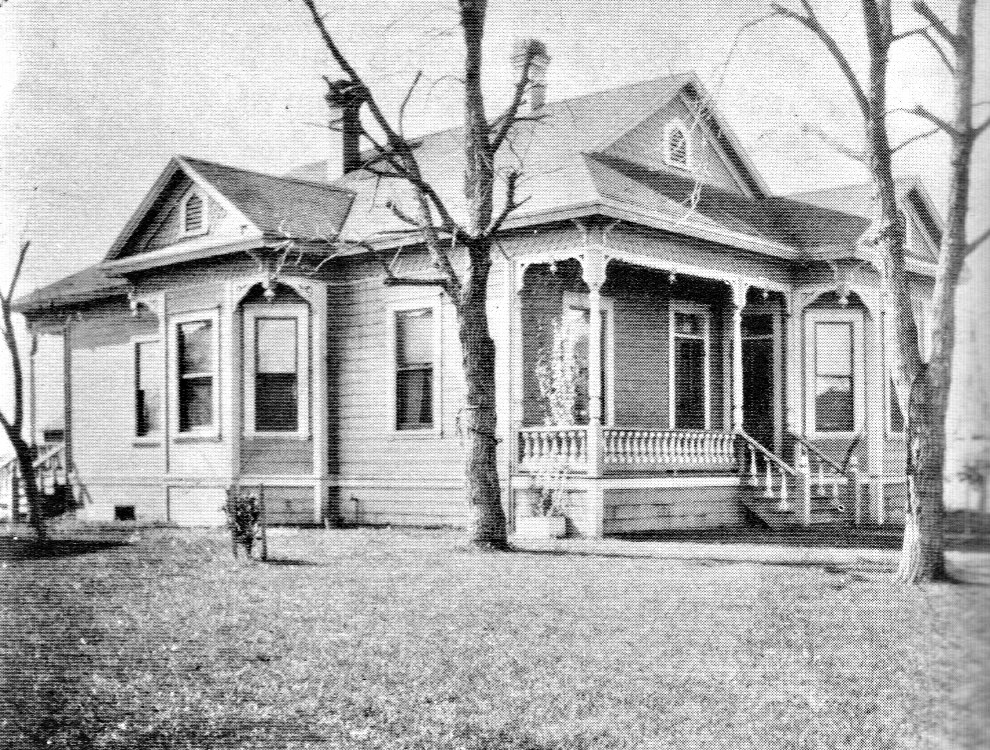 Built in 1902, the structure is one of several remaining historic houses, which once lined the boulevard near the turn of the 20thcentury.  This was the home of Dr. Hugh Beattie and his wife Ada (Gage) Beattie.  The home has 2 front doors to allow the Doctor’s patients their own entrance. 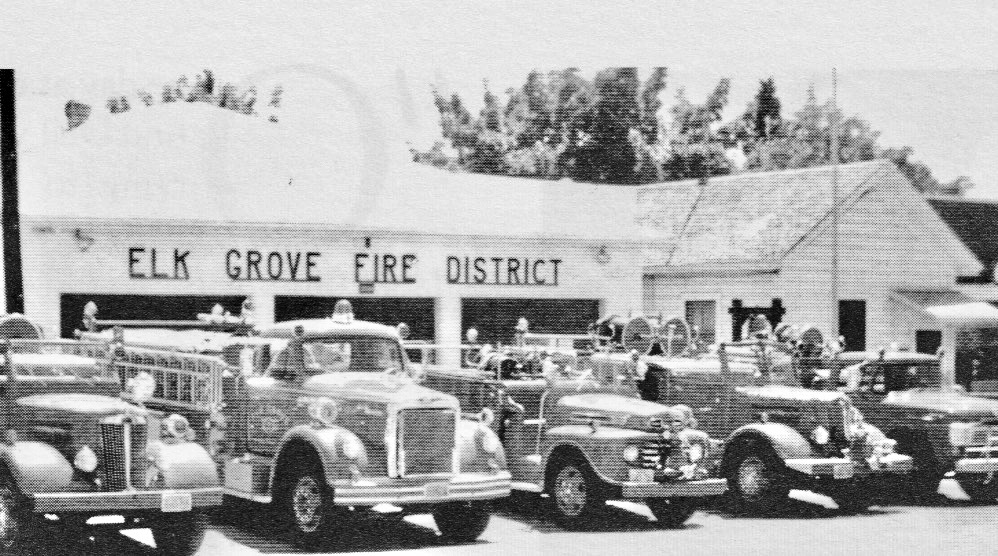 This property was purchased by the district in 1943.  They moved their fire station, a nearly 20 year old corrugated iron shed, to the location.  During this time it has been said that the firemen would sit on their engines and watch the legendary fights at Bob’s Club from a distance.  In 1951 the new fire station was built. It included 3 parking stalls, a bedroom, kitchen, meeting room and bathroom. 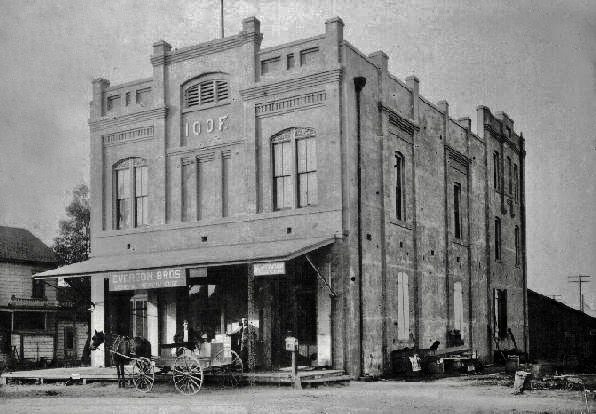 Built in 1893, this three story brick masonry structure has housed the IOOF Elk Grove Lodge no 274, Elk Grove Rebekah Lodge No. 136 and several local businesses throughout the majority of its existence.  The first building, built in 1878, was destroyed by fire. During the years of World War II, 1941-1944, Elk Grove contributed to the war efforts through the US Army Air Forces Aircraft Warning Service Ground Observation Corps.  During this time, about a quarter of the town’s approximately 1,000 residents made their way up to a fire escape on the east side of the Odd Fellows building.  A Temporary building with windows on all four sides was the site of Elk Grove’s observation post where volunteers would call in airplane sightings 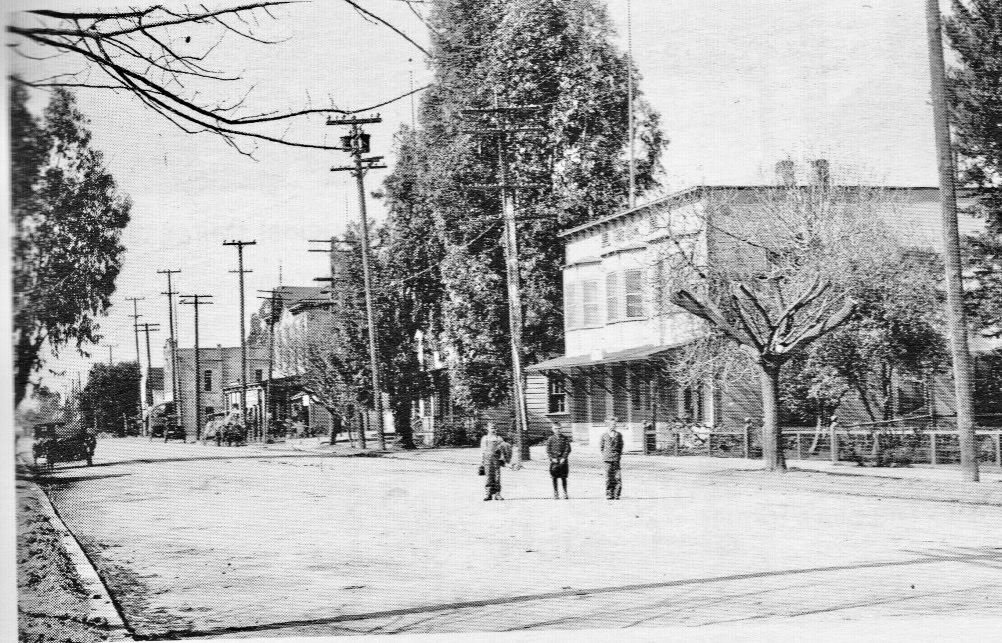 Opening in about 1911, the building was originally a mixture of first floor commercial and second floor residential studious consisting of living room, bedroom and kitchenette combinations.  Throughout many of the early years of its existence, The Elm was home to many teachers of Elk Gove Union Grammar School and Elk Grove Union High School.  During its earliest year, besides providing living quarters, the building also drew visitors to its first floor through its business, The Candycraft, Cascade Laundry, a barber shop and a dentist office. 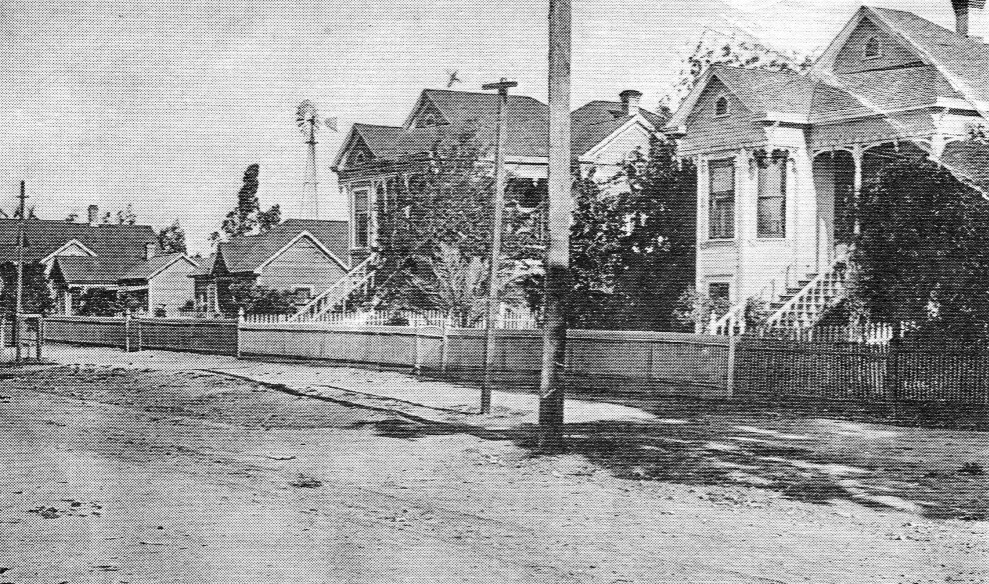 The Warren house is said to be one of only five remaining Victorian houses of about 50 which once lined Main Street.  It is believed that the house was built in 1889.  The Warren family arrived in Elk Grove after a very fortunate failed attempt to purchase tickets from England on the ill-fated Titanic. Mr. Warren opened a shoe repair business at 9080 Elk Grove Blvd. in 1916 which then moved a few doors down to 9090 in 1929.  The design of the building is reflective of Mr. Warren’s love of the Golden State with the architecture’s resemblance to a California Mission.  The shoe store remained in operation by the family until 1989. 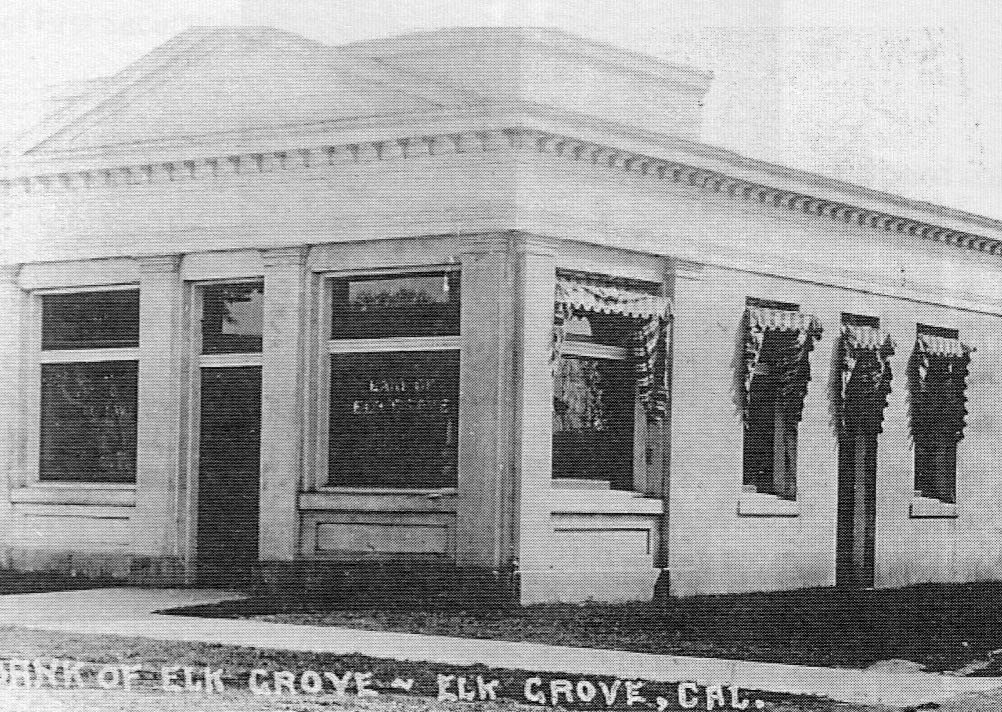 The Elk Grove Bank opened for business in 1910.  Prior to its opening, business owners and other residents held their earnings in safes and other less secure locations including hiding places in their homes.  The bank was created by several businessmen who spent $10,000 on the bank and its equipment.

We would like to thank Elk Grove’s unofficial official historian, Elizabeth Pinkerton, for her graciousness to allow us to use the above information from her “History Happened Here” (HHH) books. Elizabeth Pinkerton gathered all this information over many years and compiled everything into three books. For more Elk Grove history consider buying her history books below.

We the People, a Story of Internment in America

All book proceeds go for student scholarships. She thanks the many purchasers who have made possible the 71 scholarships she has presented, each for $1,000  – Make your check for books payable to Laguna Publishers and send to her at 9227 Lamprey Drive, Elk Grove, CA 95624.  Books are $20 apiece and California sales tax is included. Add $3 for shipping of one or two books; $5 for 3-6 books. Call her at (916) 685-0606 or email me at elizabethpink@gmail.com.  If you purchase any three HHH books you can receive them at a special price of $50.