This long time community event was created by a group of parents from Elk Grove Elementary in 1957. Principal Raymond Case and Mother’s Club President Sue Morse-Mikles decided to develop a fundraiser. They picked a western theme: working together for our children, our school, our home, and our community. The event is always held on the first weekend in May and was sixty years old in 2017. 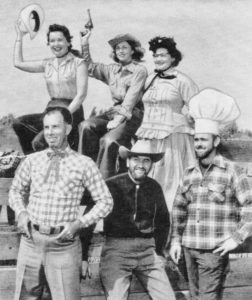 The founders put together a great group of volunteers and have continued the tradition to this day. It has changed a bit over the years, but is still going strong. The parade kicks most things off starting Saturday morning and ends in the park where there are two days of venders, booths, games, food, different types of entertainment, and of course, Johnston’s carnival. Founding group people photo curtesy of Dave & Jane Morse.

Over the years, Elizabeth Pinkerton wrote about the Western Festival and many of its traditions in her History Happened Here forum in the Elk Grove Citizen:

The Elk Grove Grammar School Mothers’ Club decided to have a fundraiser which could also be a family activity. They called their big weekend the Western Festival.

The main reason that this date was selected for Western Festival, according to the founding Mothers, was because the first of the month was payday and little ones would have money jingling in their pockets to make the festival a success. May was probably selected also because school was still in session and families were connected to the school which they might not be during the summer months. Also May was cooler and a more pleasant time in terms of weather, unless it surprised everyone by bringing rain which it has for a few festivals.

Long before Western Festival, it had become customary for Elk Grove area families to gather under the shady oaks in what is now Elk Grove Park on the first weekend in May. From the late 1800s until well after Elk Grove Park was created in 1904, the Elk Grove Grange held its huge picnic in the wonderful grove of trees responsible for our name of Elk Grove. Families came from all over Sacramento County and around – with horse and buggy and by train. It was the biggest event of the year, under the great old oak trees – a fabulous family picnic, dancing, baseball, listening to politicians with their dramatic oratory, and being with friends.

Sue Mikles (Morse) was president of the Mothers’ Club of Elk Grove Grammar School in 1956-57. It was her idea to have a school festival that could also be a community event. Mothers’ Clubs were common school organizations in the 1940s and 1950s, the predecessors of present day PTAs. They were designed for a time when Moms were home during the day and could take part in daytime school activities. Moms helped out with immunizations, the library, field trips and fund raising, just like they do today, and in Elk Grove, they had this great idea to have a festival.

The theme the mothers selected for the 1957 Western Festival was: “Working together for our children, our school, our home, and our community”. It’s still a good theme 35 years later – in fact, perhaps even more important now than ever.

Western stories were popular themes on the early day television programs, so that might have influenced the Elk Grove mothers to adopt the western focus for the festival. Dressing Western provided opportunities for children as well as adults to dress up and have fun, all in keeping with the rural environment of Elk Grove. For many years, everyone in Elk Grove dressed Western for the first weekend in May  – not just at school, but in the businesses, banks, stores, and everywhere in Elk Grove!

The cake walk was organized by the Elk Grove Elementary Mothers’ Club and was a great feature of the early festivals. The last cake walk was held in 1972, and by that time, it was a fund raiser for the Joseph Kerr 7thgrade. As the teaching team, we were in charge of the event, and we had had 300 cakes donated by the parents—all home made, of course. However, stricter health standards put a stop to this activity because cakes could not be made in moms’ kitchens any more. In a way it was okay, because it was a huge amount of work, and we found other ways to raise money. But the cake walk was a great activity for kids because for one little dime, you could win an entire cake! You walked around in a circle following numbered squares while somebody played a record. When the music stopped, you had to be on a number, and the wheel was spun. You held your breath hoping that the arrow would stop on your number—and that cake would be yours. The table would be piled high with pink cake boxes from Fox’s Bakery. Each box had a square cut into the cover and covered with clear plastic so that you could look inside and pick your favorite cake. If you were the winner, just think about it—chocolate, spice, black walnut, banana, devil’s food, applesauce, coconut, cherry, angel food, chiffon, pineapple—oh my, what choices! You and your friends would park under one of those oak trees and eat cake until you could not take one more bite—and then your friend would win the next round! No cake ever tasted as good as one won at a Western Festival cake

Parades and Sheriffs and Bicycles

There was a GREAT parade at Western Festival! Truly, it was the Mother of All Parades! There were 34 floats led by the famous Sheriff’s Posse of Sacramento County.

The kids decorated their bicycles and joined in the parade. An Elk Grove Citizen article of the time stated, “All children wishing to decorate bicycles and ride in the parade must bring notes from their parents giving permission”.

Other parade units included the American Legion, a horseless carriage with the Elk Grove Ministerial Association, a group of grandmothers riding in old cars, the high school and elementary school bands, Elk Grove’s new and old fire engines, and the floats – children’s, adult, and commercial. There was a total of 60 entries.

According to the Citizen there were 5,000 people viewing the parade. That seems like an incredible amount of people, but it was probably due to the drawing power of television. You have to remember that there were less than 5,000 students in the entire area which is now known as the Elk Grove Unified School District, so 5,000 people coming to see a parade made up quite a bunch.

Boys from Preston School of Industry in Ione

The moms and teachers of Elk Grove Elementary School made lunch for the band members from the Preston School of Industry in Ione. Remember, there was no junior high yet—the schools were K-8, and the school was in the brick building that now houses the Elk Grove Community Services. Preston was the reformatory for juvenile boys of California, and they had a very good marching band program. With only one high school in Elk Grove, and therefore, only one marching band, someone thought of inviting the Ione group for the parade. When the parade ended, they had to keep the Ione boys under supervision, so they were brought to the cafeteria where we fed them, and then they headed back to Ione. I remember thinking it was kind of strange. They were fine musicians, but because of their inappropriate and/or unlawful behavior, these boys were not allowed to participate in the festival activities except for the parade. I often wondered if marching in that parade made any of them decide to change their ways and join the next parade as a free young man!

I don’t know when the Shriners first entered the parade, but they are a huge part of for many years. Each lodge (?) has an entertainment crew. I remember there were silly fireman that pulled a fire-wagon and a group on go-karts. They are very entertaining.

Would you believe that most of the men grew beards for early day Western Festivals. They started in January and by May, the great beard contest was held. Of course, this event was dropped in the mid-1960s when beards became fashionable, and they weren’t a big deal any more. In addition to beards, the Dads cooked a great Campfire Supper and served it to the Festival goers. A group of eleven men called themselves the Chuckwagon Boys. They worked hard and had a lot of fun doing it. At the first Campfire Supper, the Dads served spaghetti along with green salad, French rolls, butter, cake or pie, and coffee or milk. The price was 75 cents.

The Western Festival became too successful, and it got so big in three years that the Mothers’ Club could not handle it. In 1960 the Elk Grove Chamber of Commerce took over the Western Festival. In the beginning two older elementary students were crowned as king and queen, and a prince and princess were selected from the younger children. The first royal children were King Don Crabbe; Queen Janet Lairsen; Prince Ronnie Lay and Princess Lena Van Santen. They added adult royalty with Melody Trott as the first Miss Western Festival. This eventually became an elaborate pageant, and led to the Miss Elk Grove contest that existed from 1965 to the late 1980s.

Now I am sure you are wondering, what in the world does Western Festival have to do with former President Ronald Reagan? Well, in 1966, guess who was Elk Grove’s Western Festival Parade Marshall? Ronald Reagan, the famous movie and television actor was running for governor of California in 1966. He rode his white horse down Main Street, and we all cheered and whistled. He spoke later at the Park, but we did not know that we were seeing a future president of the United States. See what great things are destined for you when you take part in Elk Grove’s Western Festival! 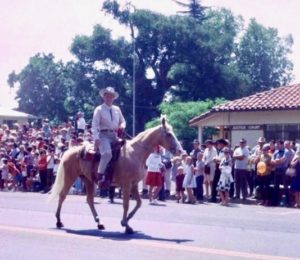 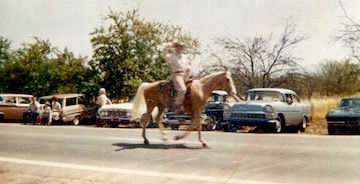